Long before George’s Lane was known by this name, it was considered to be an extension of Vance Avenue and even later as Park Road.

Even today, the area is synonymous with class and sophistication.

The featured residence of this article was constructed after two young people found each other in college and were married in 1913. They were the children of two notable men, Mr. Edwin Rand, railroad and timber man, and Mr. Horace Henry White, attorney-at-law.

Paul King Rand (1888-1956) graduated from medical school at Tulane University in 1913 and interned at Touro Infirmary. He would begin practicing medicine in Alexandria, Louisiana in the year of 1919.

Blythe White (1890-1972) attended Newcomb College and was an active girl on campus. She played basketball, belonged to a sorority, and hosted many parties.

The two were married in Alexandria, Louisiana at the First United Methodist Church which was decorated with a profusion of daisies that she had grown herself in preparation for the special day.

The happy couple built their home on Vance Extension past the bayou where they would have plenty of room to raise both children and flowers.

Just ten years later the home has been rebuilt and is more elegant than ever as it is used as the site of the wedding reception for their daughter Frances to George Whitfield Jack, Jr. who would later become a United States Army colonel in World War II, a major general of the United States Army Reserve, and a prominent attorney in his native Shreveport, Lousiana. 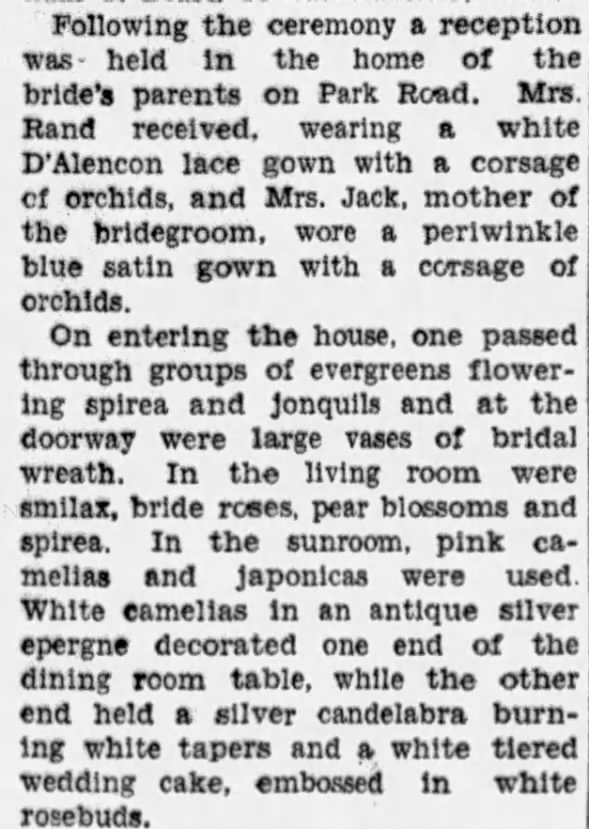 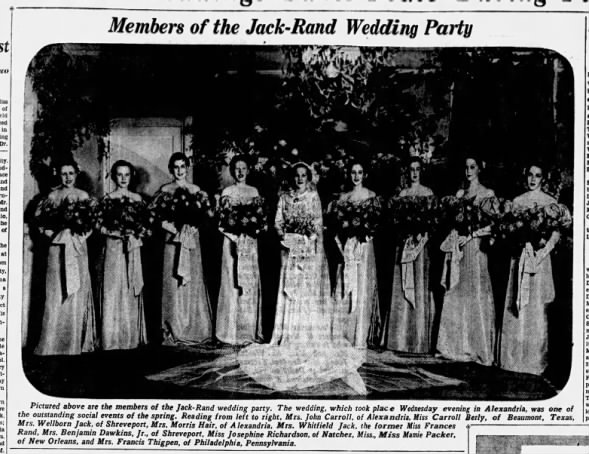 In 1944, Mrs. Cammie Henry, owner of Melrose Plantation, leased a parcel of land for a fishing camp on Cane River for one-hundred years at the price of just $1.00 to Blythe White Rand and Dr. Paul King Rand. They had been friends of Mrs. Cammie’s since the mid 1930’s. They named the camp Happy Landing. It was located just across the cotton fields and down the road from Clementine Hunter’s house.

According to the website run by the Cane River Art Corporation, http://www.clementinehunterartist.com, the Rand family had a special connection to Clementine Hunter and her journey as an artist. According to this remembrance by Blythe White Rand’s grandson, she was the recipient of Clementine’s first oil painting, “Bowl of Zinnias”.

“As my grandmother related the story to me, she and Miss Kinsey were visiting together, and Miss Kinsey was so struck by the beauty of the zinnias and the copper pitcher, that she began to do a sketch for a still life of the arrangement. At one point Clementine came into the room and commented that she thought she might be able to paint a picture, too. Miss Kinsey stopped her sketching and rounded up a collection of partially used tubes of oil paint and gave them to Clementine, telling her to take the copper pitcher and the flowers and try her hand.On my grandmother’s return a few weeks later, Clementine presented her with the painting of the pitcher and the bouquet of zinnias. It was done on a piece of corrugated cardboard, actually the side of a corrugated box; and in her enthusiasm Clementine had apparently used up the entire supply of paint. The oils were laid on with abandon in thick brush strokes and generous dabs. The zinnias seemed to almost come alive, ready to be picked.”

The Name Change to George’s Lane

In 1942, a resident of Park Road and employee of The Town Talk, George Patterson Jr. was killed in action aboard the U.S.S. Vincennes. The residents rallied in his memory and agreed to change the name of their street to “George’s Lane”.